The power of Automation Workshop Free Edition lies in its architecture. Whenever you want to automate some process, it is necessary to answer basically only two questions, namely, when to execute a Task and what exactly the Task should do.

Trigger is a constituent part of an Automation Workshop Task. It constantly monitors system events of particular type. When an event matches the set of criteria defined in Trigger configuration, the Task is automatically started.

Action is a constituent part of an Automation Workshop Task. When the Task is started, it sequentially performs all Actions that it contains. The Actions themselves are the core functional elements that do all the actual work.

Variable Wizard takes care of the communication between Triggers and Actions. Output of a Trigger or an Action can be used as a parameter in some other Action. This way an Action can flexibly react to the multitude of particular situations that each time involve different values. 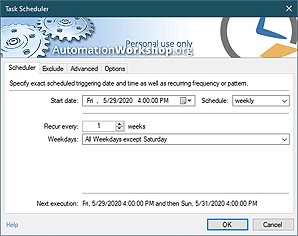 A great software for entire computer automation. Above all its free for home users. Developers deserve huge applause. Thank you very very much!—Pankaj R.
Add your own quote…