The process of automation normally consists of building a functional connection between different programs and processes. For example, an output of some application or process may become an input of another.

Automation Workshop can pick up the necessary data and process it on its own or, if necessary, feed it to other application, thus streamlining all necessary steps into an organized uninterrupted data flow. The connection is built by creating Tasks, the basic functional units of Automation Workshop.

Building Tasks is easy. Automation Workshop features Task Wizard which leads through the Task building process in a step-by-step manner. The Task building consists of some essential steps. First, it is necessary to determine when the Task will automatically start.

Automatic start of the Task depends on the configuration of its Triggers. A Trigger is a component of the Task which watches for occurrence of events of specified type within the range of predefined parameters. When the Trigger conditions are met, it launches the Task which performs its Actions.

An Action is the what of the Task. Actions perform specified instructions to react to initial conditions of the system (from a new file being detected in some folder to a more complex set of parameters uniquely matching the criteria).

During building the Task you will use the ready-made building blocks with easy-to-use graphical user interface. There will be no need for expensive programming, writing code or scripts or anything along these lines.

Configuring Triggers and Actions is simple. These sub-units of a Task do not only monitor the system or perform some rigid instruction, but can actually interact among themselves providing a possibility of flexible approach to process automation.

Once automated, the system becomes much more efficient. Automation not only eliminates unnecessary delays, but also is virtually exempt from error. Automated systems do not make mistakes or mix folders; they do not make typos or forget to finish their work. As soon as an automated Task is properly deployed, it immediately starts to save human time and business expenses from then on.

Yet automation should not get out of control. After setting up the primary functionality of a Task, there are also other parameters such as event logging, email reports, error handling and much more, all easily configurable in Task Wizard. 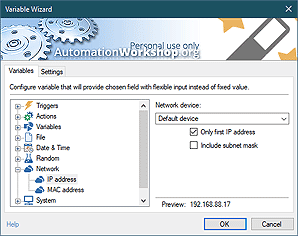 Automation Workshop is an awesine product—light-weight, easy to use and gives me the control I need.—Christopher I.
Add your own quote…