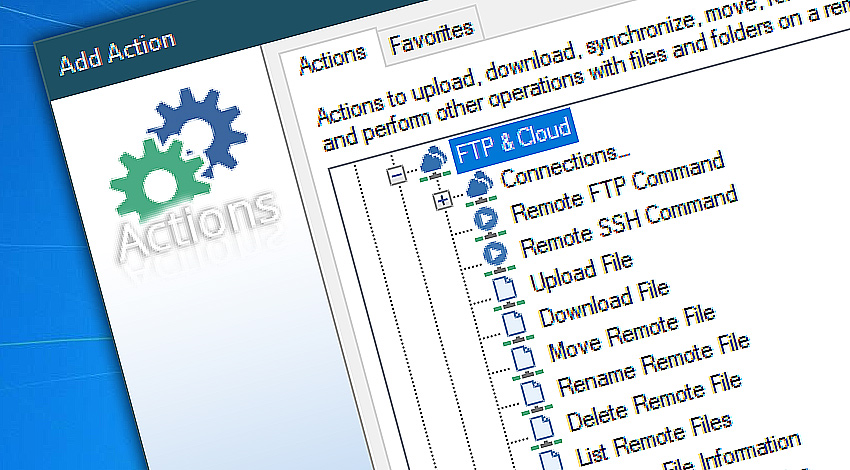 Nowadays automating local files, or file transfers in your local network is not enough. Files are spread all over the internet on various websites, in Amazon S3 cloud, hosted on FTP, FTPS, or SFTP servers. Automation Workshop features FTP & Cloud Actions that supplements already extensive list of File & Folder Actions.

For example, let's consider need to automate file and folder synchronization between FTP server and local machine. Moreover, the FTP server is secured by the latest SSL technology known as FTPS. The Task would consist of built-in Task Scheduler Trigger, that will start the auto-sync task hourly, daily, or weekly. And of two Actions that will do the actual synchronization between two folders—remote and local. The first Action is Connect to FTP, and second—Synchronize Directories. There are many tutorials on how to create automation tasks.

Connect to FTP can connect to any FTP or FTPS server. It supports Active and Passive modes. It supports SSL and TLS connections with standard username/password authentication support, as well as more secure client certificates.

Connect to WebDAV is useful to connect to Web Distributed Authoring and Versioning servers that are used by many popular products such as Microsoft OneDrive.

Close Connection Action is used to terminate a connection to the remote server gracefully. It is used to connect to multiple remote servers (defined in .csv file, for example) in parallel, to free system resources a soon as they are no longer needed.

Remote SSH Command Action sends an automated command or commands to a remote SFTP server. An output of the command can be captured and processed with further Actions down the workflow.

Move Remote File can be used to move a file on a remote server without need to transfer it to the local machine.

List Remote Files Action gathers a list of files or directories from the remote servers. It has unique and extensive sorting and filtering capabilities. Combining it with a Loops Actions and other file Actions, such as Upload, Download, Delete or Move, it is possible to perform file operations on remote file sets based on file size, wildcard, file timestamp, Linux filesystem permissions, and much more.

Synchronize Directories is similar to popular Linux/Unix utility rsync, that allows to synchronize files between FTP, FTPS, SFTP, WebDAV, Amazon S3, local and network drives fully automatically or on schedule. If used with FTP & Cloud Watchers, it can perform bi-directional synchronization in real-time. It also has an option to limit network bandwidth. 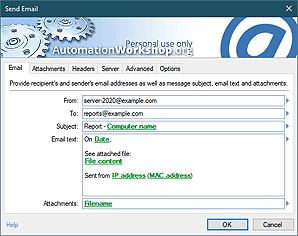 Been using Automation Workshop for a while now and find it indispensable. Job well done!—Bob G.
Add your own quote…